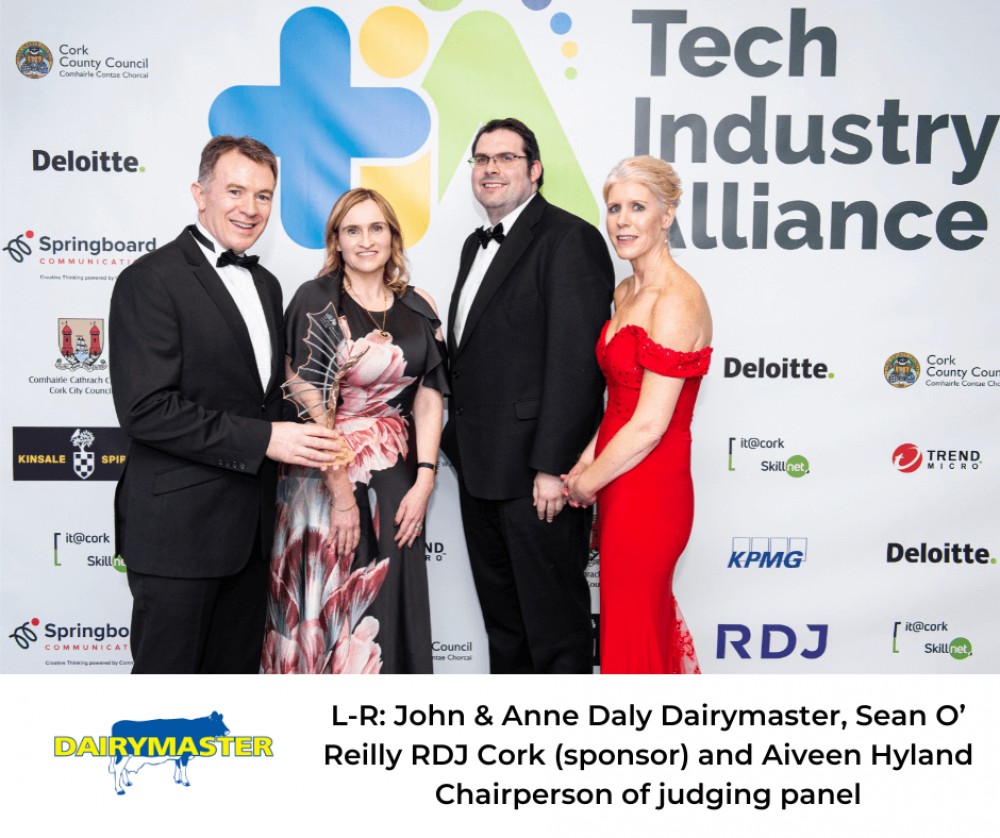 Going From Strength to Strength!

Farm Compare is delighted to showcase award-winning leaders in their field. Today we hear how Dairymaster is going from strength to strength as they were announced “Multinational Company of the Year” at the Leaders Awards which showcased the best of South West Ireland’s thriving ICT community and recognised excellence in innovation, business and technology. The prestigious gala dinner awards ceremony was held last night (Friday 4th November) in Cork.  The Leaders Awards recognise all those who have gone further than most in the use of technology in their respective organisations and businesses in the South West region.

It was also an exciting night for the organisers IT@Cork and KerySciTech as their collaboration now known as Tech Industry Alliance was officially announced by Michael McGrath Minister for Public Expenditure and Reform.

“We are thrilled to have won this award, it's huge recognition for our great team of people. As many know, we are based in Causeway in a rural part of Kerry and to be able to make an impact locally has led to greater things globally for us. Key to our success is the diverse range of engineering skills and manufacturing capabilities employed across a broad range of disciplines all under one roof. I would like to thank John Daly for accepting the award on behalf of our team”.

Dairymaster employs over 300 people at their Global Headquarters in Kerry where all of the company design and manufacturing activities take place. Dairymaster has sales and market support operations in the UK, Germany, the Netherlands and the USA. These centres are further supported by a worldwide distributor network selling, installing and servicing their products.

Dairymaster has shown extraordinary commitment to the southwest region over its five decades of growth. Dairymaster is unique in terms of its vertical integration with over 95% of its products manufactured in-house, having bucked the trend of out-sourcing to lower cost economies and instead carrying out all design and manufacturing in Kerry. This gives the company the flexibility required to ensure its innovative products meet the needs of its customers in every market.

As the company continues to expand, Dairymaster is always looking for new skilled employees to drive further growth. The continuous investment in automation and new capabilities drive an ever-increasing demand for skilled and educated team members.

Dairymaster is active in the southwest business community and the wider technology industry at a national level. Their commitment to innovation excellence has seen the company collaborate with local and national research organisations and also actively supports the development of industry and learning networks in the South West.