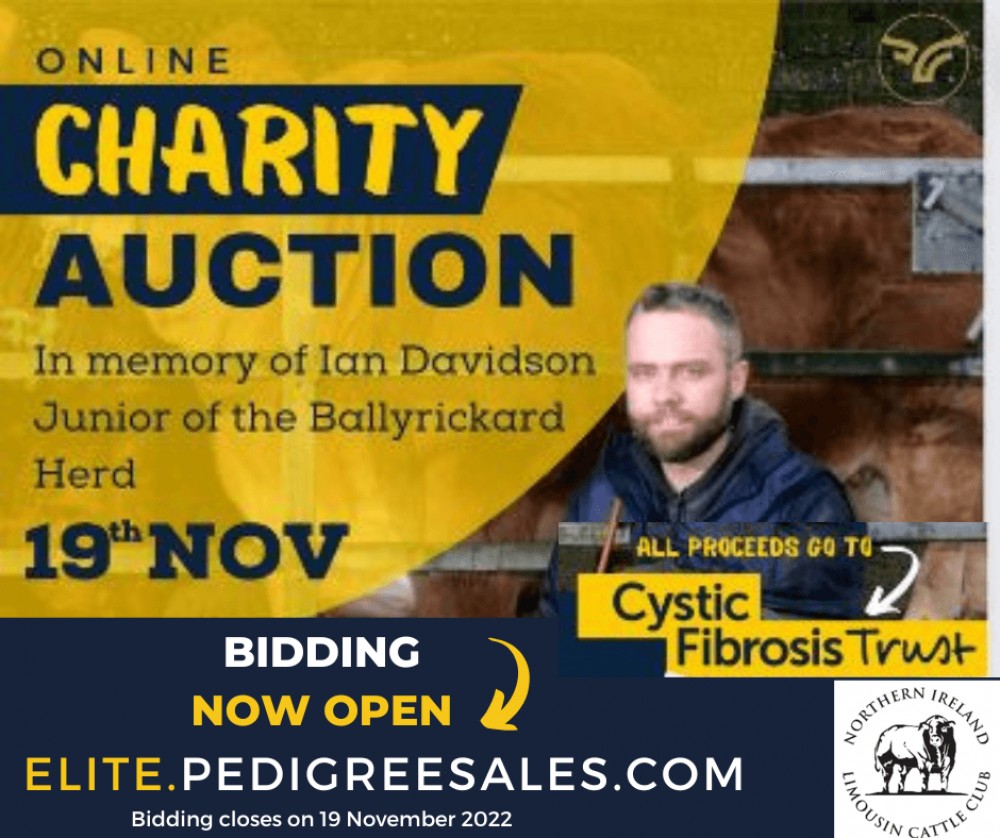 Farm Compare are delighted to be supporting the Northern Ireland Limousin Cattle Club which is running an online charity auction this week to support the work of the Cystic Fibrosis Trust and in memory of fellow breeder and friend Ian Davidson Jnr of the Ballyrickard Herd, Larne.
Ian sadly passed away on 31 July this year at the age of 38.  Born with cystic fibrosis, Ian had a double lung transplant in August 2014 in Newcastle, England.  At the time Ian said the transplant had changed his life, it allowed him to be up early and out on the farm with his Limousins or working at the family engineering business alongside his father Ian senior. 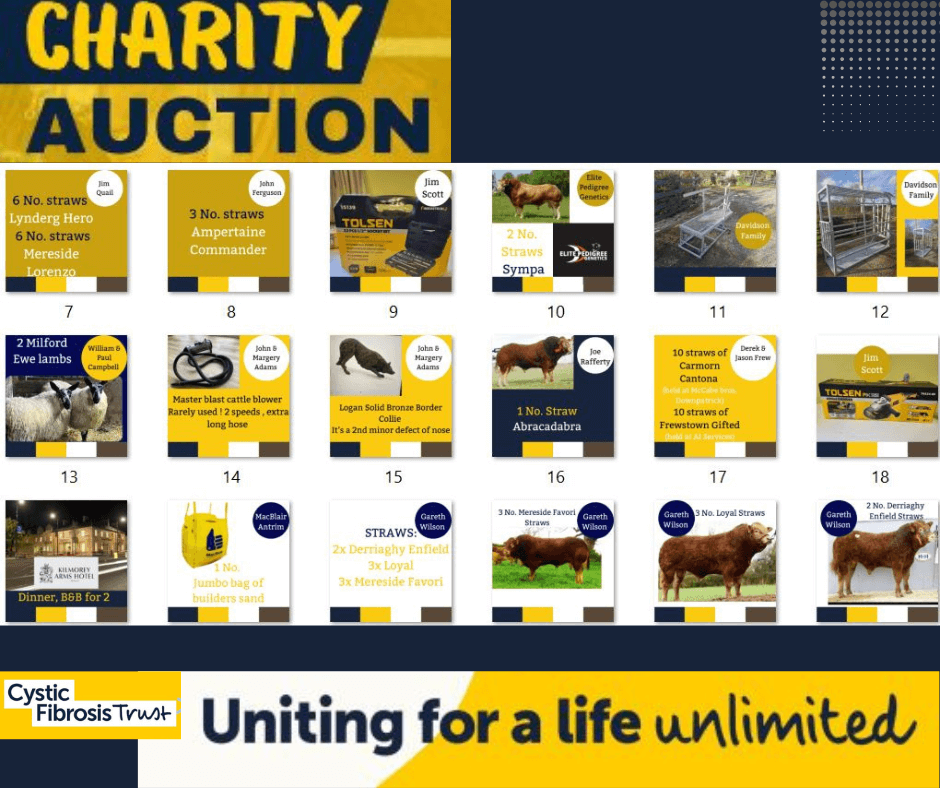 A strong supporter of the Limousin breed Ian loved sourcing and trying out new and old limousin bloodlines which over the years resulted in multiple show winners, sale leaders and pedigree herd competition awards of which he was very proud. Ian was actively involved with the young breeders and took great pleasure in helping new breeders in any way he could.  He had many friendships both at home and wider afield which is evident from the number of donations the club has received for the charity auction in his memory.
With over 70 lots up for grabs, there are items available to suit all tastes and interests.  These include straws from formidable sires, embryos from the Trueman, Bernish, Ballyrickard and Martin herds, Milford ewe lambs, sheep dressing stand, calf creep feeder, overnight stays in hotels, a P&O ferry crossing, accommodation at a holiday cottage in Scotland, power tools, blowers, clippers, and hampers to name but a few.
Full details of the charity auction listings can be found HERE  and to register to bid please use THIS LINK 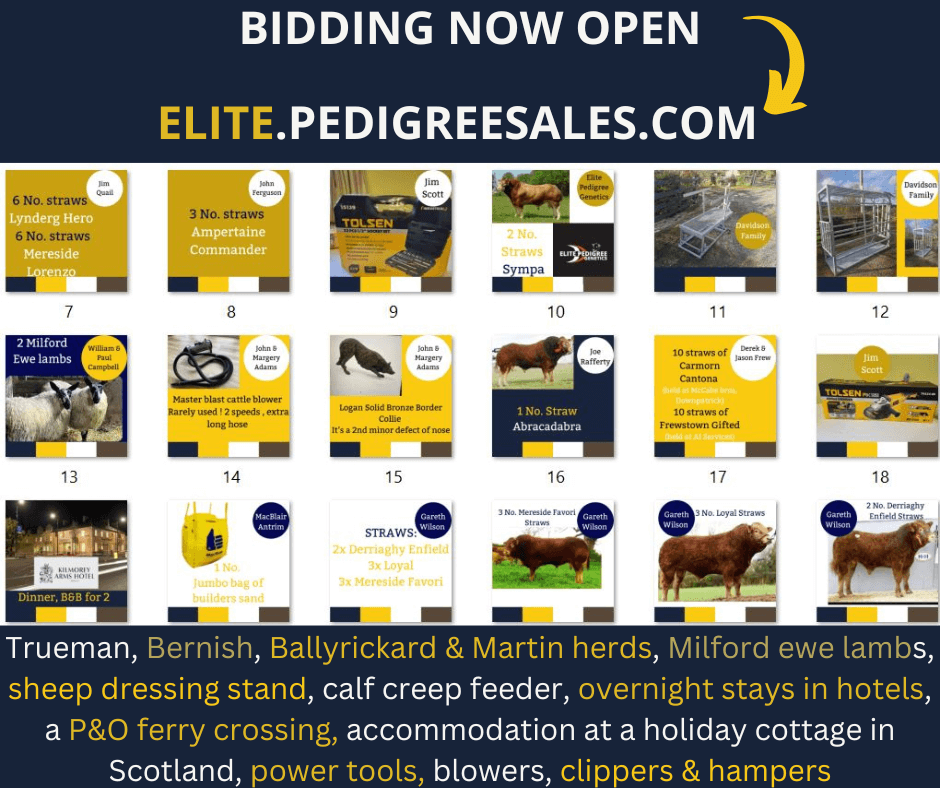 Bidding for the lots opened on Friday evening past and will close at the Club’s annual prize giving and dinner on Saturday 19 November.  An auctioneer will be in the room as all lots go under the hammer for final bids before they are sold to the highest bidder.
The club would like to thank everyone who gave donations for this charity auction in Ian’s memory, friends, businesses, breeders and the farming community and also those who are now bidding for the numerous lots on offer. 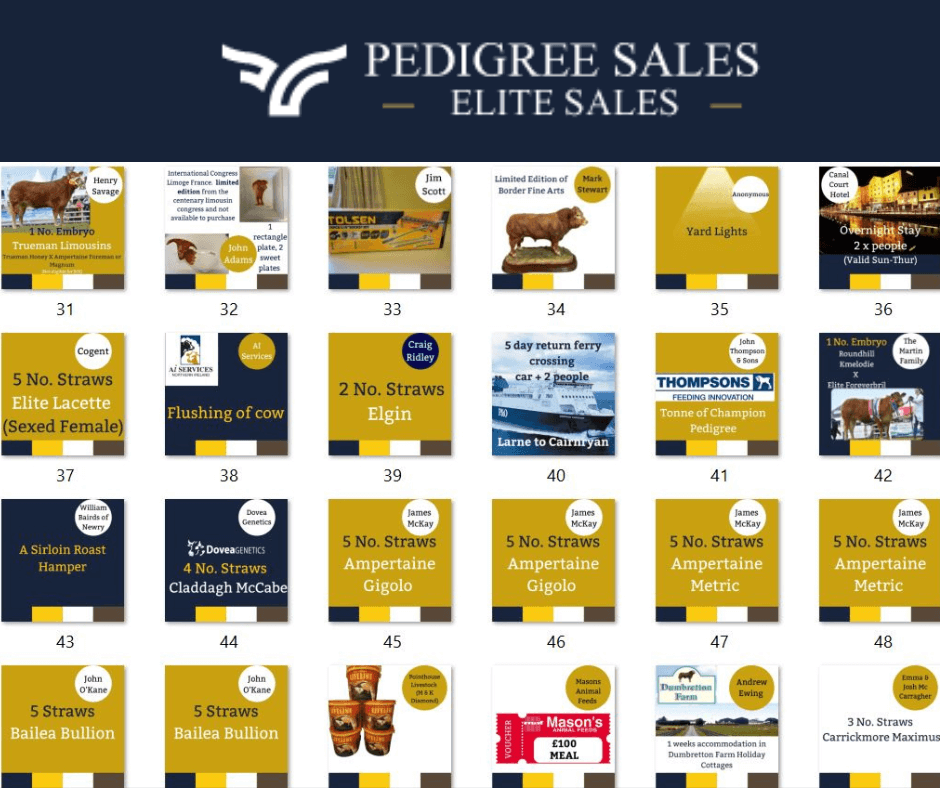 The club are also indebted to Tommy Staunton and his team at Elite Pedigree Sales who are running the on line charity auction on our behalf and to the media for their continued support of our charity journey.
“As a club we are extremely proud to have already presented charity donations to N.I. Air Ambulance and the Red Cross (Ukraine Appeal) this year and with everyone’s help we hope to make a further generous donation to Cystic Fibrosis from this on line charity auction.”